She worked as Daisy Ridley’s double in Star Wars : The Force Awakens , wowing us with her light sabre wielding skills. 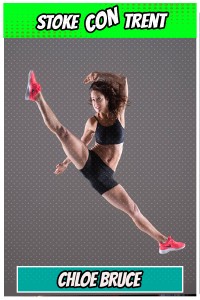 She is Guinness World Record Holder for most amount of kicks in 1 minute and also was World kickboxing champion!
Her film credits are as impressive as she is:-

To meet Chloe and also see her one off demonstration