The Fifth Doctor Who

Doctor Who’s Tardis will be rematerialising at Staffordshire University on April 17th for Stoke CON Trent #4 with Peter Davison appearing from it. 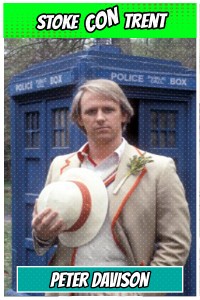 London born Peter Davison played the fifth Doctor from 1981 to 1984, taking over from Tom Baker and becoming the youngest person to play the role. He has since appeared in more recent episodes of the series.

After leaving the series after an the initial three year stint, fearing being typecast, Peter gained a local connection by appearing in Anna of the Five Towns, based on the Arnold Bennett book of the same name.

Davison has also appeared in All Creatures Great and Small, At Home with the Braithwaites, Law and Order :UK, Unforgiven, Lewis, Miss Marple and many other TV series and Films.

Get YOUR TICKETS for Stoke CON Trent #4