Rachel Shenton starred in ‘Hollyoaks’ as Mitzeee Minniver, originally cast in 2010, her character was a wannabe glamour model who had some explosive story lines including being imprisoned, charged with GBH. 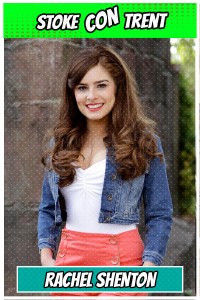 Since leaving ‘Hollyoaks’ she can be seen on American TV series ‘Switched at Birth’ playing young student teacher, Lilly Summers.

Other TV appearances include roles in ‘Holby City’, ‘Waterloo Road’ and ‘Doctors’.

Rachel will be signing autographs at our April convention to raise money for the DeafLinks charity, of which she is an ambassador.