He is gonna be in high demand this year as he is a Stormtrooper in ‘Star Wars – Episode VII – The Force Awakens’.

Appearances in the James Bond film Skyfall and work on other movies like Mission Impossible 5, Guardians of the Galaxy, Cinderella, The Gunman (do those last two seem like polar opposites – they do to me 🙂 ) and  Thor: The Dark World to namecheck a handful,  Phoenix isn’t a newcomer to the world of entertainment. 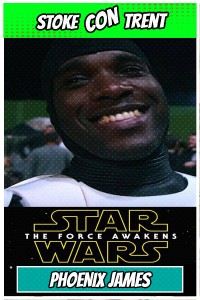 Get YOUR Tickets to meet him at Stoke CON Trent #4