Jessica Martin is a multi-talented performer whose career has taken her from comedy impressionist to musical theatre leading lady and scriptwriter. She recently received critical acclaim for her one woman show Sunset Bitch at the new  Waterloo East Theatre and was the first artiste to perform in cabaret at the newly refurbished  Savoy Hotel. 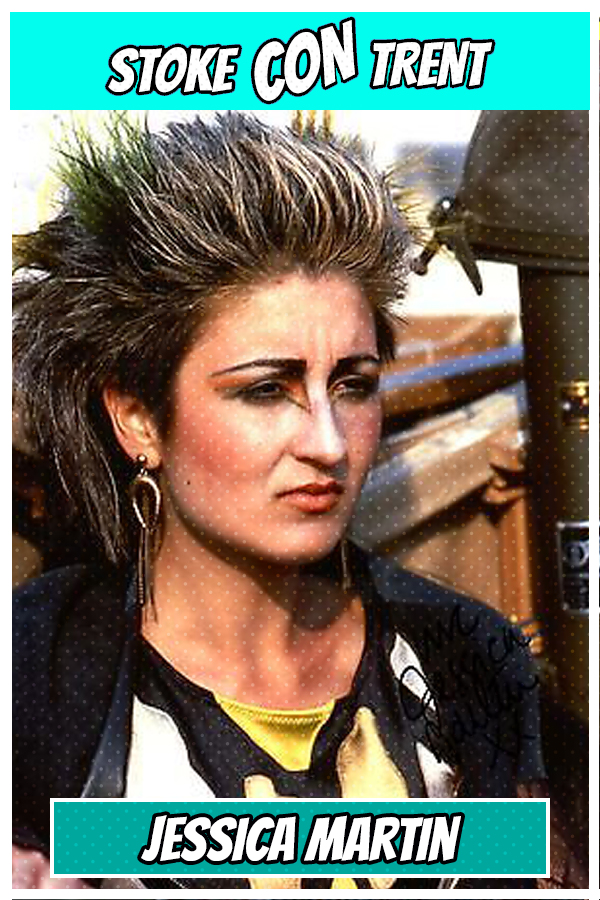 She guest starred in Doctor Who starring previous Stoke CON Trent guest Sylvester McCoy as the Doctor. She played Mags in The Greatest Show in the Galaxy. (see youtube link below). The episodes were released on DVD in 2012. She also provided the voice of the Queen in the Voyage of the Damned with David Tennant as the Doctor in the 2007 Christmas special.

Jessica began her professional career at sixteen, singing with her jazz pianist father at the St, James Club in Mayfair. She graduated from  Central School Of Speech and Drama and London University with a B.A honours degree in English and Drama. Shortly after that she developed a solo cabaret act as a comedy impressionist. Regular gigs on the comedy cabaret circuit soon landed Jessica her first prime time television success as the sole girl impressionist in LWT’s  Copycats and voice work on  Spitting Image with regular spots on variety and chat shows as well as guest appearances on a number of  Royal Variety shows.

Jessica crossed over to musical theatre when she starred as Sally Smith in the West End production of  Me And My Girl at the Adelphi Theatre for two years, followed by a sell out national tour.

Other leading roles include Mabel Normand in Jerry Herman’s hit West End musical  Mack And Mabel at the Piccadilly Theatre, Nellie Forbush in a national tour of  South Pacific, Dorothy in The Wizard of Oz, the Olivier award nominated productions of  Babes in Arms and The Card, both at the Open Air Theatre Regent’s Park, Mrs Lovett in Stephen Sondheim’s  Sweeney Todd at London’s Bridewell Theatre, and Trudy in Dick Vosburgh and Denis King’s  A Saint She Ain’t, at the King’s Head Islington.

Other plays include  Candida,  Surprise Party and  Larkin with Women plus numerous radio credits including her own Radio 2 special set in forties Hollywood  Cybill Liberty,  Ned Sherrin’s Review of Revues for BBC Radio 2, and the role of Alma Cogan in Radio 4’s  Stage Mother, Sequinned Daughter. She recently played Barbra Streisand in the Radio 4 play Jack Rosenthal’s Last Act, directed by Maureen Lipman.

She has had a long association with  Ian Marshall Fisher’s Lost Musical seasons amongst which she has played leading roles in  On A Clear Day You Can See Forever,  Finian’s Rainbow,  Fifty Million Frenchmen and  Silk Stockings.

Jessica has also enjoyed success with her one woman shows featuring her movie star alter ego Veronique Raymond in  Blame It On My Youth,  Where Was I,  Veronique – A Life Long Cult and  Sunset Bitch which played at the  New York Fringe Festival in 2005. She created a new musical comedy  Taste The Love, which premiered at the  Jermyn Street Theatre in 2004 and played Pippa and Sylvia in  Exclusive Yarns at the  Wimbledon Studio Theatre later that year. She returned to  Jermyn Street with  Danny and Sylvia in November 2005.

Come to Stoke CON Trent #6 on April 9th 2017 at Staffordshire University in Stoke and Meet Jessica.