Paul is most well know for his role as Greedo in Star Wars: Episode IV – A New Hope. 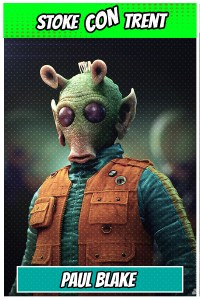 Greedo is a Rodian bounty hunter who was working for Jabba the Hutt, He was hired to capture Hans Solo, which bought in the question “who shot first?” when Greedo met his death.

Paul has played many other roles including Macbeth but feels that his role as Greedo is his proudest moment. He tells a great story about how he got the role through a friend Anthony Daniels who played C3PO. and how he got George Lucas to get him a coffee.