Shane was born in Toronto, Canada.

After a successful singing career in Canadian TV where he had his own show Come Fly With Me, he was brought to England in the late 1950’s by Director Dick Lester to appear in an ITV Special. He then returned to Canada to feature in a Canadian lm Flaming Frontier, before marrying an English dancer and making London his home.

He has appeared in more than 70 films in the UK and Europe. His first major film appearance was in Stanley Kubrick’s Dr Strangelove as Co- Pilot Ace. From there he went on to roles in Star Wars and three James Bond Films Diamonds Are Forever, You Only Live Twice and The Spy Who Loved Me. 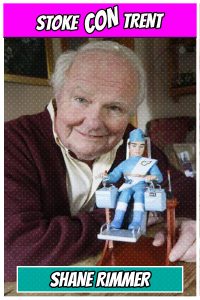 These were followed by Superman 2 and 3, The People That Time Forgot, Warlords Of Atlantis, The Holcroft Covenant, Alien Autopsy, S*P*Y*S*, Rollerball, Gandhi, Reds, Out Of Africa, The Bourne Identity, The Dogs Of War, White Knights, Hanover Street, Reunion At Fairborough, Whoops Apocalypse, Space Truckers, Batman Begins, The Dark Knight and many more.

He has also featured in many notable TV productions – Dr Who, Dennis Potter’s Lipstick On Your Collar, N.B.C’s The Nightmare Years, Coronation Street, Tales of The Unexpected, A Very British Coup, Brooklyn Bridge, and Hiroshima.

Shane is a legend in the world of Gerry Anderson productions, providing one of the most recognizable voices in Supermarionation history for Thunderbirds’ Scott Tracy. He is also the voice of Dick Spanner P.I. in the cartoon series of the same name.

He has appeared in episodes of Space 1999 and UFO, written and appeared in The Protectors and The Persuaders and has written many episodes of Captain Scarlet And The Mysterons, Joe 90 & The Secret Service. National Theatre Productions include True West, Guys & Dolls, Death of a Salesman and a Tricycle production of Called To Account.

Shane’s Autobiography From Thunderbirds To Pterodactyls was published in October 2010 by Signum Books. Following this, Big Finish produced a 3 disc Audio CD of the Autobiography with Shane as the reader.

The paperback version of the same title came out in 2014. Shane is a familiar face on the Convention circuit and remains an active voice artist, currently recording The Amazing World of Gumball for Cartoon Network. His first novel Long Shot has just become available as an Ebook on Amazon.