Let’s Get Planning And Welcome

Katy Manning was born in Guildford, daughter of writer JL Manning OBE. Trained as dancer, she then attended the Webber Douglas School of Dramatic Arts. Her television career began with the ground breaking John Braine series “Man at the Top”. During this, Katy was offered the role of Josephine Grant in “Doctor Who” with the unforgettable Jon Pertwee. Douglas Camfield (Director of many Doctor Who stories) cast Katy in an “Armchair Theatre” and “Target” with Patrick Mower (very different roles from the innocent Miss Grant!). She also hosted her own Arts and Crafts programme “Serendipity”. 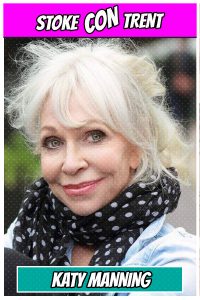 With a career that has spanned over 40 years and three continents. Theatre work includes, in the West End, “Why Not Stay For Breakfast?”, “There’s a Girl in my Soup”, “So Who Needs Men?”, “Run For Your Wife”, starring alongside Derek Nimmo, Bernard Cribbins, David McCallum and Eric Sykes. Katy joined the Young Vic for “Hamlet”, “Real Inspector Hound” and “Rosencrantz & Guildenstern are Dead”. In Australia at Sydney Opera House, Elvira in “Blithe Spirit” and the title role in “Educating Rita”, “The Odd Couple” with Jack Klugman and Tony Randall. “Otherwise Engaged”with Martin Shaw and “See How They Run” with Andrew Sachs.

Katy has also performed her one woman show, a true story of Bette Davis “Me and Jezebel”, directed by partner Barry Crocker (yes, Bazza MacKenzie himself!) across Australia. Katy brought the show to The New End Theatre in Hampstead, London to great critical acclaim, followed by another very successful season at the Edinburgh Festival.

Katy has voiced numerous cartoons and won several awards including Best Supporting Actress at the Melbourne Film Festival and several European awards as the voice of the ten year old Gloria in the animated cartoon “Gloria’s House”. She has directed Banjo Patterson, Shirley Valentine and two Australian musicals, while on UKTV (Australia) she hosted her own interview show with guests including Lenny Henry, Simon Pegg, Robson Greene, Cleo Laine and Mr. Basil Brush himself!

For over a decade Katy has recorded audio dramas for Big Finish Productions as Iris Wildethyme in her own series, as well as reprising the role of Jo Grant, in the Companion Chronicles range, guests on many other stories including “The Confessions of Dorian Gray”. Katy wrote and performed “Not A Well Woman” in New York and LA and has now recorded it as an audio for Big Finish (now available, also on iTunes, complete with 26 voices).

Katy has recently returned to television screens as Jo Grant, some forty years on, in “The Sarah Jane Adventures”, alongside the late Elisabeth Sladen and Matt Smith as Doctor Who, written by the incredible Russell T Davies.

For the US and Australia, Katy has just voiced a feature length animation playing the title role of Oakie (a nine month old puppy dog) in “Oakie’s Outback Adventures”.

Katy has now returned to live in her beloved England which will mean spending some “time – traveling” back and forth to Australia to keep both Barry and Archie (the dog) in order! Katy’s twins, Georgie and JJ live in Australia and London.

Tickets are now available to Stoke CON Trent #5, our previous 4 events have SOLD OUT in advance