Be Crowned on The Iron Throne at Stoke CON Trent #4

Be Crowned on The Iron Throne

Our latest attraction has been admired by many including the owner of the most sumptuous variety of this type of regal furniture.

The Iron Throne, created by Victoria Maclean of Prop Maker Wales is the only fan made ‘Game of Thrones‘ Iron Throne in the world to have been celebrated by HBO themselves. 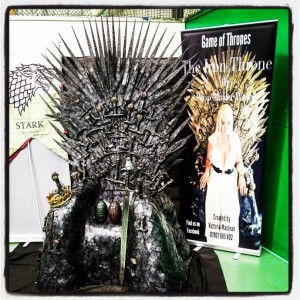 It has been used and signed by many of the cast members from the show on its travels including Richard Madden (Rob Stark) and Mark Addy (King Robert Baratheon).