We Must Have Balls Of Steel

To Bring Neg To

Without doubt, Neg’s Urban Sports was the stand-out act from ‘Balls of Steel’. After 3 series and 13 Urban Sports, Neg’s hilarious antics had propelled him to cult status in the UK and beyond with a mind boggling 150 million views on YouTube.

Some of Neg’s inventions including ‘Burger Bowl Off’ and ‘Knock and Don’t Run’ have become hugely viewed online, with the clips resurfacing and going viral to new audiences around the world.

This popularity lead Neg to America where for he co-created, produced, wrote and starred in a hidden camera show for MTV USA bringing to life dozens of new characters filming in Toronto, New York and Las Vegas.

Soon after it was off down under to Sydney, where Neg resurrected the Urban Cowboy to star in 2 series of ‘Balls of Steel Australia’, which became the most watched programme EVER on the Comedy Channel. And yes, Neg’s fan base is still growing as all of these clips reach further worldwide thanks to the internet;

Neg’s Facebook fan-base is almost up to half a million people! Aside from hidden camera genius, Neg’s serious acting credits include TV shows ‘EastEnders’, ‘The Bill’, and ‘Footballers Wives’, plus hit horror movie ’28 Weeks Later’. 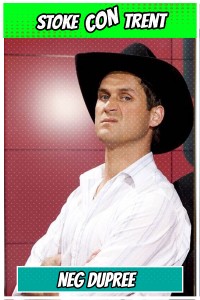 Neg has also fronted a worldwide advertising campaign for FHM, written for various comedy sketch shows on the BBC, Ch4 and ITV including ‘Off Their Rockers’, and performed countless characters whilst co-presenting shows on Kerrang and Absolute Radio.

Neg has even been busy recording a comedy dance music EP with Basement Jaxx alumni, ‘The London Punks’ – who also accompany him on his ‘Neg’s Urban Sports Night’ live shows, touring the country’s universities.